A Deadly Education by Naomi Novik 📚

I greatly enjoyed the author’s Temeraire series of Napoleonic adventures (with dragons), and her more recent fairy tale retellings Uprooted and Spinning Silver; and now I have finally finished reading this novel, first in a series, set in an entirely new and horrifying world.

Although there are certain elements in this story which echo those in that series of books about a magical school, the two could not be more different in scope and intention. The present volume is entirely first person, narrated by El, who is not the hero of her own story; indeed she is desperately trying to avoid becoming the villain. The cast of characters is varied but not large, and the world itself is positively claustrophobic, as almost all of the story, save for a few flashbacks, takes place in the self-contained magical “Scholomance,” a wizardly building constructed outside the bounds of the world, populated exclusively by student adepts. The horrifying part is that the purpose of the school is to protect the developing wizards from roaming malicious magical creatures straight out of the D&D monster sourcebook, all intent on consuming the magical essence of the young magicians; and over many years the system has broken down and the school itself has become infested. Survival rates are marginally better than trying to survive on your own in the outside world, but that’s not saying much.

El herself is a bit of an enigma, unaffiliated with the powerful enclaves which shelter the elite of the magical population in the outside world, she starts her junior year without friends, but it quickly becomes clear that despite her magical aptitude for spells of mass destruction what she really wants is to find a few friends, upend the social order, and (if possible) not die horribly. At one point I had to put down the book for a while because I was so concerned that El was going to be disappointed in her choice of friends, but on coming back and starting again from the beginning I was able to keep going to the end of the term, learning (along with El) a little more about who she is and who her friends really are. But don’t worry, there are more volumes on the way, and senior year awaits!

The writing throughout is excellent, El is a snarky delight, and the monsters are horrible, but the biggest monster is the Scholomance itself, which is at once dorm, classroom, and faculty, imposing daunting lesson plans on the captive students according to some obscure magical rubric which is never really explained, rooted in a complex and convoluted system of magic where powerful spells come with powerful costs. 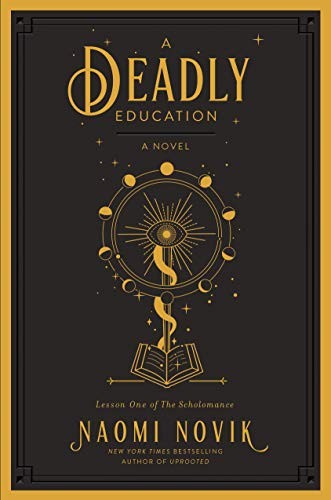