I’m not sure what to make of this book, it’s a combination of space opera, court intrigue, battle tech, and many yearning glances between the varied cast of characters. I don’t think it’s a spoiler to note that this is the first volume in a planned series, so I did not expect the many plot lines to be tied up at the end, but having gotten there I was surprised how few were resolved.

The story jumps between three main characters, including the eponymous royal heir Sun, her noble-born companion Persephone, and Apama, a random soldier on the other side of the war who seems mainly to serve as a mechanism for providing background on the forces opposing Sun. Or perhaps not random, there is a certain amount of unresolved foreshadowing about Apama which hints at more to come. Each of these three are constantly moving from one desparate adventure to another, including assassination attempts, ground and space battles, and in Sun’s case leading her team of official companions in a hunt for spies and traitors, across worlds and teaming cities.

There’s a lot to take in, and the number of people to keep track of is daunting, but I found that each had enough of a personality to usually (but not always) follow what is going on. Many of the characters are over the top, either particularly adept and attractive (hence the many yearning glances mentioned above), or in the case of those opposing Sun especially villainous.

What I found most fascinating was the extensive world building with multiple cultures inhabiting the far-flung worlds, the complicated social structures which are just accepted as is in the narrative rather than being laid out in exposition, and the way in which I slowly gained some understanding not only of the characters themselves but of the societies from which they came.

But I’ll need to wait for subsequent volumes to decide how I really feel about this one. 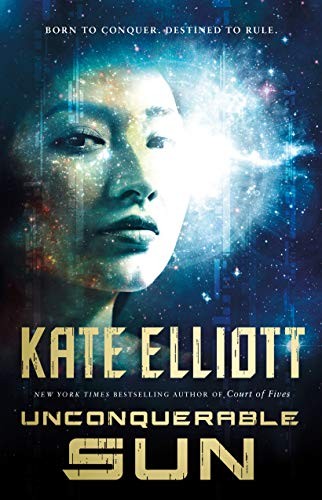