My new plan to get back into reading is to sample shorter works, which brings me to this title from a few years ago. The author has a new book out recently which I ran across on the new book shelf at the library, which in turn reminded me that I had been meaning to read Archivist Wasp. I found it in the stacks, and it is a compelling story.

By the way, I can’t say how nice it is to be able to walk into the library again and actually look for books on the shelves, or walk up to the circulation desk to pick up a request. Masks are required and everybody is wearing them, but this in no way detracts from the pleasure.

Archivist Wasp is in some ways a very simple book, telling the story of Wasp, who holds the office of Archivist in a small town, an unpleasant position which separates her from society, places her under the authority of the town’s unsavory priest, and requires her to spend most of her time alone trapping and disposing of ghosts, which are endemic. The narrative follows her point of view as she encounters the unique ghost of a former soldier and their subsequent journey into the realm of the dead on a hunt for the ghost’s former companion.

But at the same time the story is very complex, taking place in a vaguely described post-apocalyptic world, with numerous flashbacks to explore the soldier ghost’s history during that apocalypse. At the same time, Wasp’s own backstory is revealed to be different from what she had been taught. The stories of these two characters are interlaced in a complicated series of adventures and revelations, and both experience meaningful change and growth. There is clearly a deeper story here which is only partially revealed during the journey; for example, we never learn why there are so many ghosts, or how the ghost realm came to be; these things are just presented as accepted fact.

The story comes to a satisfying conclusion, resolving the personal arcs of the two main characters, while at the same time leaving much of the world unexplained. Perhaps more will be learned in the sequel. 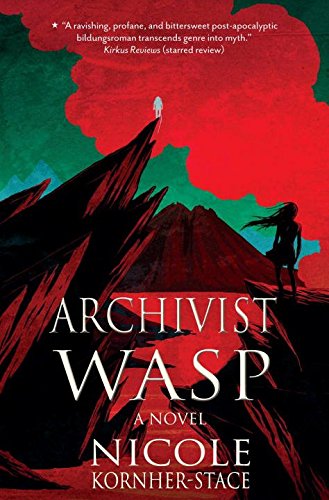