Our Declaration by Danielle Allen 📚

I have been reading this book on an off for a while, mainly because it is organized into many short sections which require thought and reflection after reading. I don’t think it is intended to be read in one sitting, as it is based on courses devoted to the text of the Declaration which the author has taught over the years. It is not a weighty tome, but it does examine each word of the Declaration and consider the meaning and implications, both original and contemporary.

The Declaration of Independence is a remarkable document, and with recent political developments it is more important than ever to understand what is actually says. It is the foundational outline for why the United States exists and describes the basic principles for that existence. Allen’s central thesis is that the most fundamental of those principles is equality, expressed at several levels: the equality of nations to determine their own destiny; the equality of the citizens of those nations to determine when their government is or is not fulfilling its purpose (in particular preserving the rights to “Life, Liberty and the pursuit of Happiness”); the equality of access to the levers of that government; and equality of input to the social consensus necessary to determine the form and processes of governing. She makes a strong case that equality is the thread which binds the document together.

There is some discussion of how the Declaration was written, but the book is firmly based on the text itself rather than being a historical narrative. It does examine the question of how a society which allowed extreme inequality and enslavement could be founded on such a egalitarian basis, and I still find it hard to understand how Jefferson in particular could manage the cognitive dissonance of expressing such lofty ideals in the Declaration while continuing to enslave and exploit others. There were many contemporaries decrying the evils of slavery, and there is no qualifying footnote in the Declaration on the phrase “all men are created equal.”

There have been many attempts at theorizing an ideal society (Plato’s Republic, More’s Utopia, and so on), but what has always appealed to me about the Declaration and the subsequent American Experiment is the practical, nuts-and-bolts application of idealism to the real world. It starts with some basic assumptions (the tyranny which the colonists blamed on King George, violating the rights which their social consensus expected) and proceeds quickly via a few simple arguments (based on equality) to the conclusion that we, the people, have the power and duty to determine our own form of government, and most importantly that the signers (as representatives of that social consensus) were doing exactly that, establishing “Free and Independent States.” Rather than just publishing a theory they did the experiment. 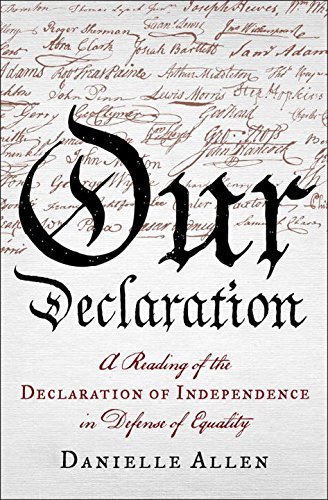